THE SUBCONSCIOUS SELF IN THE WAKING STATE

THE results of our experiments prove the secondary self to be the highway of suggestion. Suggestibility is the very essence of the subwaking self; and since this is also the essential characteristic of the hypnotic self, we may therefore conclude that the subwaking self of the normal individual is identical with the hypnotic self. We arrived already at this conclusion in a former chapter, when we were discussing The Double Self; and now, having started from quite a different point, we once more come to the same truth. The proof therefore seems to be complete. Still, in order to elucidate thoroughly the subject under investigation, I bring here one more proof as to the identity of the normal subconsciousness and the hypnotic self.

An acquaintance of mine, Mr. W., a highly suggestible young man, came to visit me. For the sake of amusement, without expecting any definite result, I tried upon him the following experiment: I took an umbrella, put it on the ground, and asked him to pass it. He did it easily. "Well," I said, "but this is not the way I want you to go about it." I put myself opposite him. "I will count slowly, one, two, three, four, and each time you make a step." I counted; he passed the umbrella. "Now, once more!" I counted with great solemnity, with great emphasis, and laid particular stress on number four. He passed the umbrella, but, it seemed to me, with some hesitation and difficulty. Without giving him time to rest, I exclaimed, "And now, once more!" I counted slower than before, with greater emphasis and laid still more stress on four, and while pronouncing it I stretched out my arm and made my hand as rigid as possible. To my great surprise, and to that of those present, Mr. W. could not pass the charmed umbrella. His legs became rigid, and his feet were as if fastened to the ground. He was suspected of simulation. The gentlemen who witnessed the experiment could not conceive how a strong, sane young man, in the full possession of his consciousness, should not be able to pass such an innocent object as an umbrella. Mr. W. really could not accomplish this ordinary feat, which a child of two can easily do; he tried hard; his face became red and bathed in perspiration on account of the muscular strain, but all his efforts were futile. "No," he exclaimed at last in great dismay, "I can not do it! "

Later on, in the presence of two Boston High School instructors, I repeated again the same experiment on Mr. W., and with the same result. Mr. W. exerted himself to the utmost, but all his efforts were in vain; he could not pass the charmed line. By this time he became accustomed to this strange phenomenon, and he sat down with a smile, acknowledging that he could nut step over the umbrella.

I then tried on Mr. W. another experiment. Pronounce "Boston."―"Boston," and he said it easily enough. "And now again." I stretched out my hand and made it perfectly rigid. "P-p-p-p-oston!" he ejaculated with great difficulty. "Again." I made my hand still stiffer, and pointed it almost directly in his face. No sound. "Don't look at me," he said at last, "and I'll be able to say it."

"Well, then," I said, "try the following sentence: ‘Peter Piper picked a peck of pickled peppers.' " He began to say it, but when he came to "peck of" I raised my hand and stiffened it. "P-p-p-e-cc-k" came from his lips; he began to stammer and could not continue.

"Is it possible," asked Mr. W. of me, "that if you meet me on the street you could make me of a sudden dumb and paralytic?" I gave him an evasive answer.

"Try now to write 'Boston,'" I requested Mr. W. He did it, and wrote with great ease." Again." I stiffened my hand, loudly and authoritatively suggesting a like rigidity of his hand. His hand grew more and more rigid; "Boston" became more and more broken; the hand went in jerks and jumps, breaking at last the point of the pencil.

"And now let me see whether you are able to write your name." Again the same result. He could not write his own name. 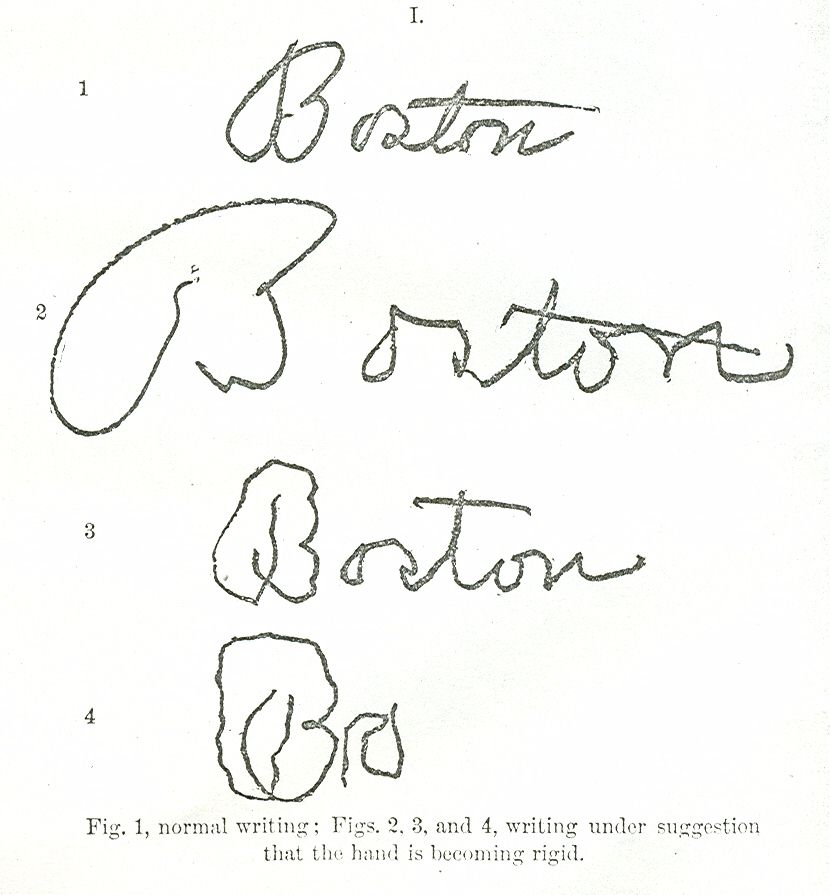 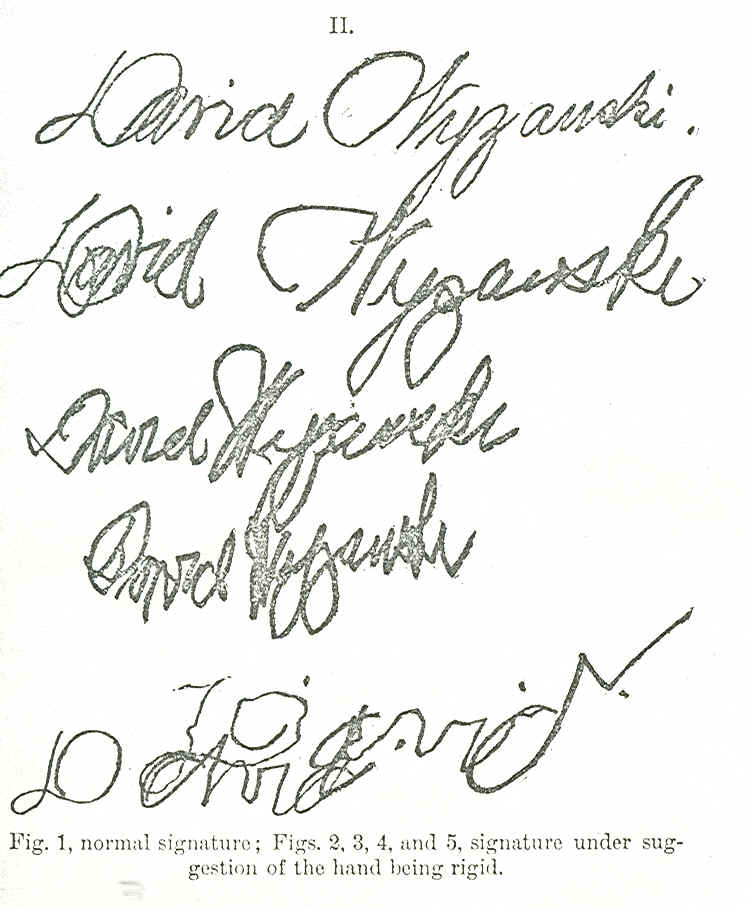 Afterward I hypnotized Mr. W., and found he fell into the very last stage of somnambulism.

Now these last experiments, together with others of the kind adduced by Bernheim, Delboeuf, etc., and mentioned by me in a previous chapter, certainly do give strong evidence of the presence of the hypnotic self in the normal waking state. We have here a young man who in his normal waking condition takes suggestions characteristic of the hypnotic state. The hypnotic self is present in the waking state of man as the subwaking self. The case adduced by me is certainly rare, unique, but it serves to bring out the truth of our contention clearly before the mind of the reader.

We saw above that al kinds of suggestibility, whether normal or abnormal, must have as their prerequisite some disaggregation of consciousness, a disaggregation of the two selves, of the waking and of the hypnotic subwaking self. Now such a disaggregation could easily be effected in Mr. W., and this was proved by the fact of his subsequent falling into the deepest somnambulic condition on being hypnotized. For, as we have shown above, the difference between normal and abnormal suggestibility is only a difference of degree of disaggregation. In the hypnotic state this disaggregation is comparatively more complete, far more permanent, than in that of normal suggestibility. In the normal state, even when the subject is highly suggestible, the disaggregation is transitory, fleeting; it occurs only during the time of the suggestion, and the equilibrium is restored on the suggestion being over; but this is not the case in the state of abnormal suggestibility. In the waking state, however suggestible the individual may be―that is, however easy it is to dissociate momentarily the one self from the other―still the waking self does not lose its hold on the subwaking self; the waking self can still control; his authority, although somewhat impaired, has nevertheless power and commands obedience. This is beautifully shown by the experiments I made on Mr. W. the day after.

Next day Mr. W. came to me again. Again I tried on him the same experiments so successfully carried out the day before, but this time the results were quite different.

I put the umbrella on the ground and asked him to step over it. He did it without the slightest inconvenience. I counted slowly, stiffened my hand, but of no avail. He stepped over the umbrella, although occasionally with some slight difficulty.

"Just try to write your name,' I said. He wrote it. "Again." He wrote it once more. I asked him to write slowly; meanwhile I raised my hand, stiffened it, kept it before his very eyes. The results were now extremely interesting. His hand became cataleptic; he could not manage it. In a loud voice he began to give suggestions to himself. "I am able to write my name; I can write my name; I will and shall write it; yes, I can; I can write my name;" etc. Each time as he caught sight of my raised hand and listened to the torrent of suggestions I poured forth his hand became slightly cataleptic and the letters became broken, but each time as he repeated his suggestions the hand went on writing, The waking self of Mr. W. and I were contending for the possession of Mr. W.'s secondary self; and Mr. W. succeeded at last in gaining full control over his secondary self. My suggestions were completely disregarded. 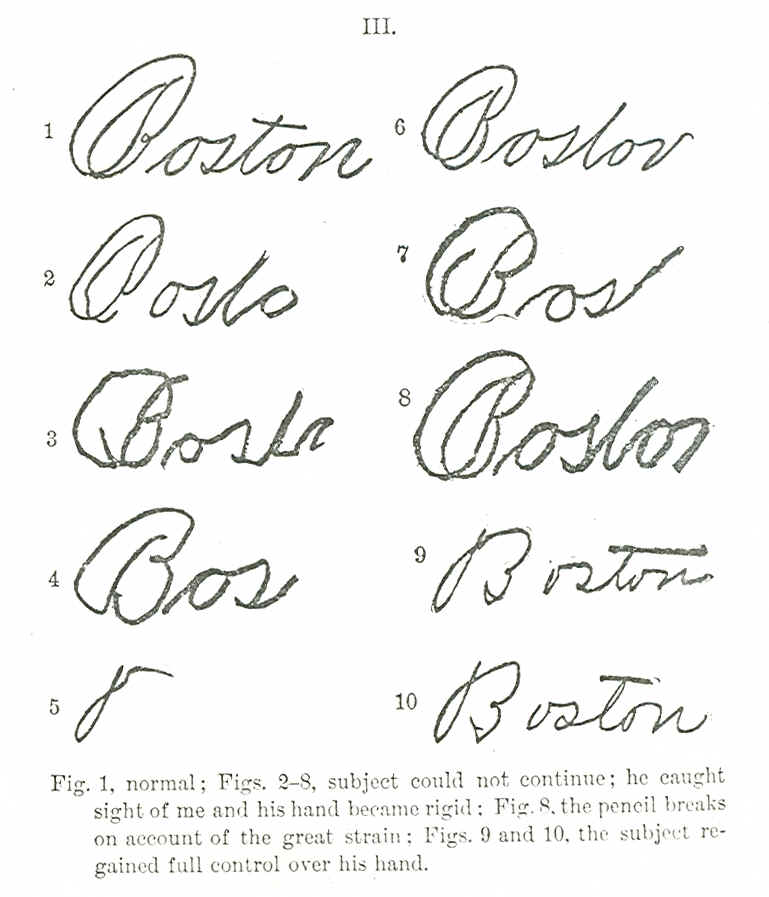 These last experiments and observations bring out clearly the fact that the hypnotic consciousness is present in the waking state as the subconscious self.