BORIS SIDIS and WILLIAM A. WHITE

THE PATIENT'S HISTORY AND EXAMINATION

D. F., the patient, age thirteen, was admitted to the Binghamton State Hospital, April 8, 1897. According to the medical certificate, the patient "previous to the attack was quiet and modest; is now boisterous and profane; will throw anything she gets in her hands at anyone she sees; has said if she could get a knife she would kill some one; breaks windows. She will fight, strike, pull hair, try to pull boards from side of the house; throws pillows and bedclothes, screams, uses vile and profane language; has to be watched to keep her from climbing out of windows, etc. Struck at mother; tried to break window; laughs violently; sings and screams, such as: 'I want a pint of whiskey; ha, ha, ha, God damn you! Sonny, are you tired?’"

Patient is of a neurotic family on paternal side; paternal grandmother was insane; father committed suicide. On maternal side family history is negative. Up to her thirteenth year nothing abnormal had been noticed in the patient: she was well and attended school regularly. About the 16th of March, 1897, she became suddenly disturbed mentally; she was violent and excitable, destructive, using profane and obscene language, threatening those about her with personal injury; would do rash acts, thus requiring the constant care and watchfulness of her people.

When admitted, she would not talk to the examining physician, and is described in the case-book as having a stupid, somewhat dazed, look. The night of her admission, and the following morning, she had two convulsive seizures, accompanied by abdominal pain and crying. On examination in the morning, she presented marked tremor of the right hand, was reticent, and had no recollection of the facts which led to her commitment as insane. It was noted that she could not see well. She complained that after a short application to reading the words on the page became blurred and indistinct. An examination of her field of vision showed a marked contraction, the maximum range being only 25° (see Figure I). Vision was, however: OS 20/15, .50 astigmatism; OD 20/15, .50 astigmatism; the right disc was hyperæmic.

A physical examination revealed the fact that the patient possessed a moderately sized goitre and that she had not yet menstruated. No other physical abnormalities were found and the rest of her bodily functions were normal.

An examination of the patient’s general sensibility in the waking state gave the following results:

Hand: Pointed out precise place immediately after touch. A few seconds later (about 5 sec.) pointed out about 2 mm. farther.

Five out of eight cases correct; direction of sound correct.

When watch was moved toward ear from a region in which it could not be heard, the distance was diminished; when moved in opposite direction, distance increased.

Differentiation between dull and sharp points:

Pressure  20 on forehead, one trial, correct.

Pressure  30 on back of hand, one trial, correct.

Pressure  20 on back of hand, one trial, correct. 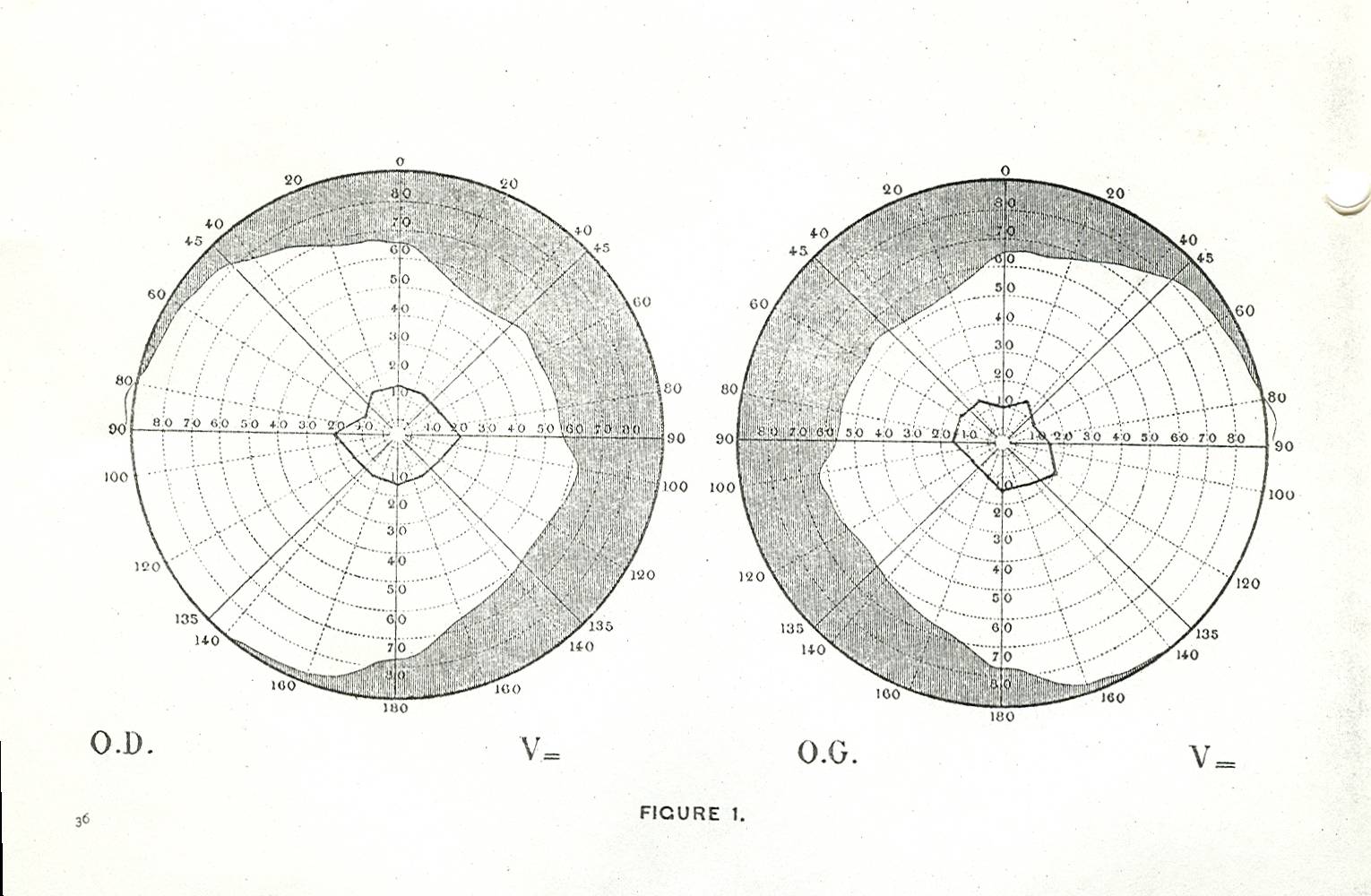 Patient was blindfolded,―letters, figures, etc., drawn on left forearm, patient given pencil and paper and asked to reproduce immediately the outlines of figures or letters. Results negative. There was a tendency to reverse figures drawn.

When blindfolded movements communicated to fingers and arm were correctly reproduced with other hand and arm:

The field of vision for white, red, blue, and green were taken. The field of color vision showed reversal. (See Figure 2.)

Very sensitive to different colors; picks them out at once, matches them perfectly. Picks out of a basket of woollen yarns light colors by preference.

The sense of smell was highly discriminative. The dynamograph gave the following results: 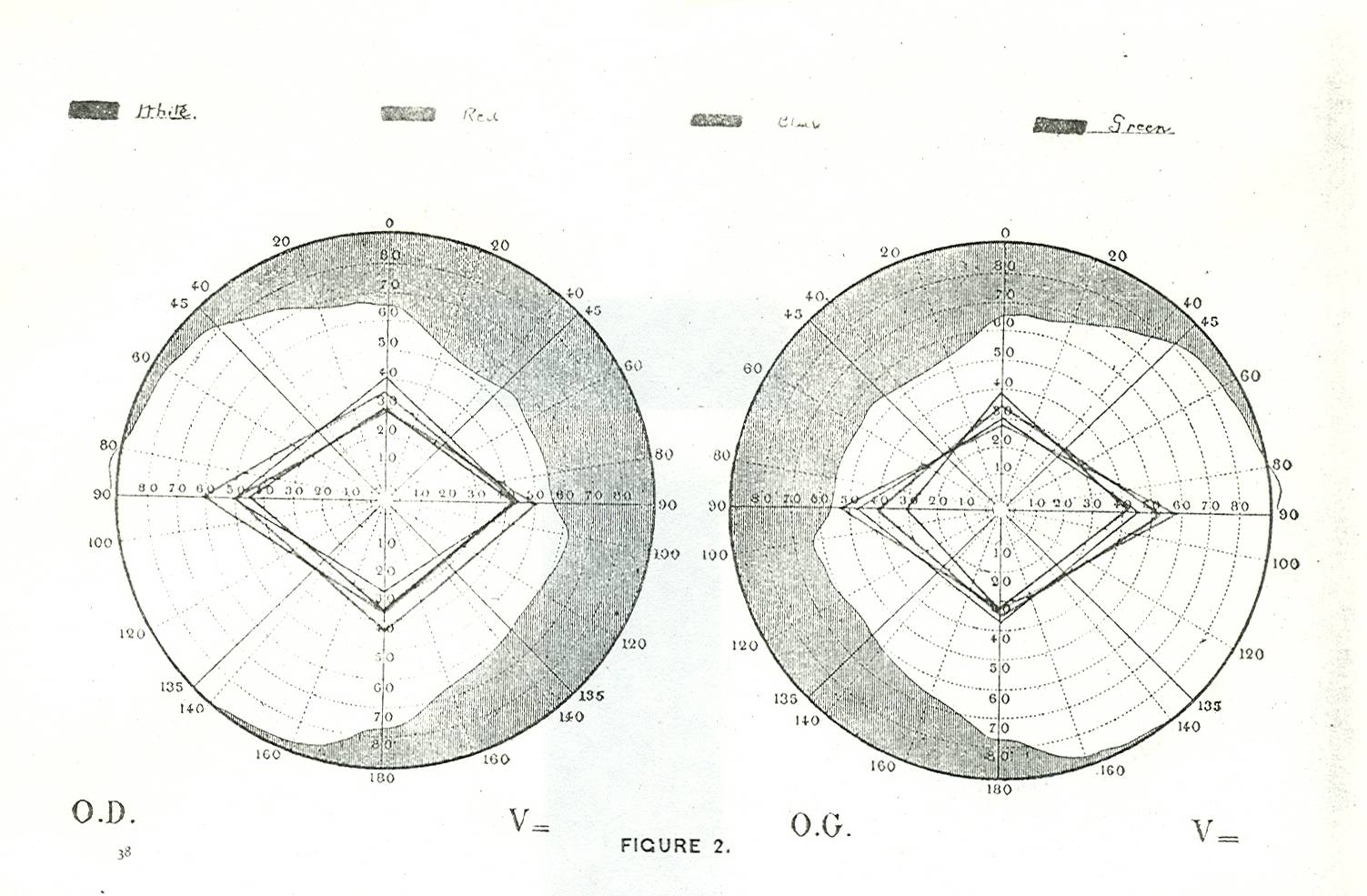 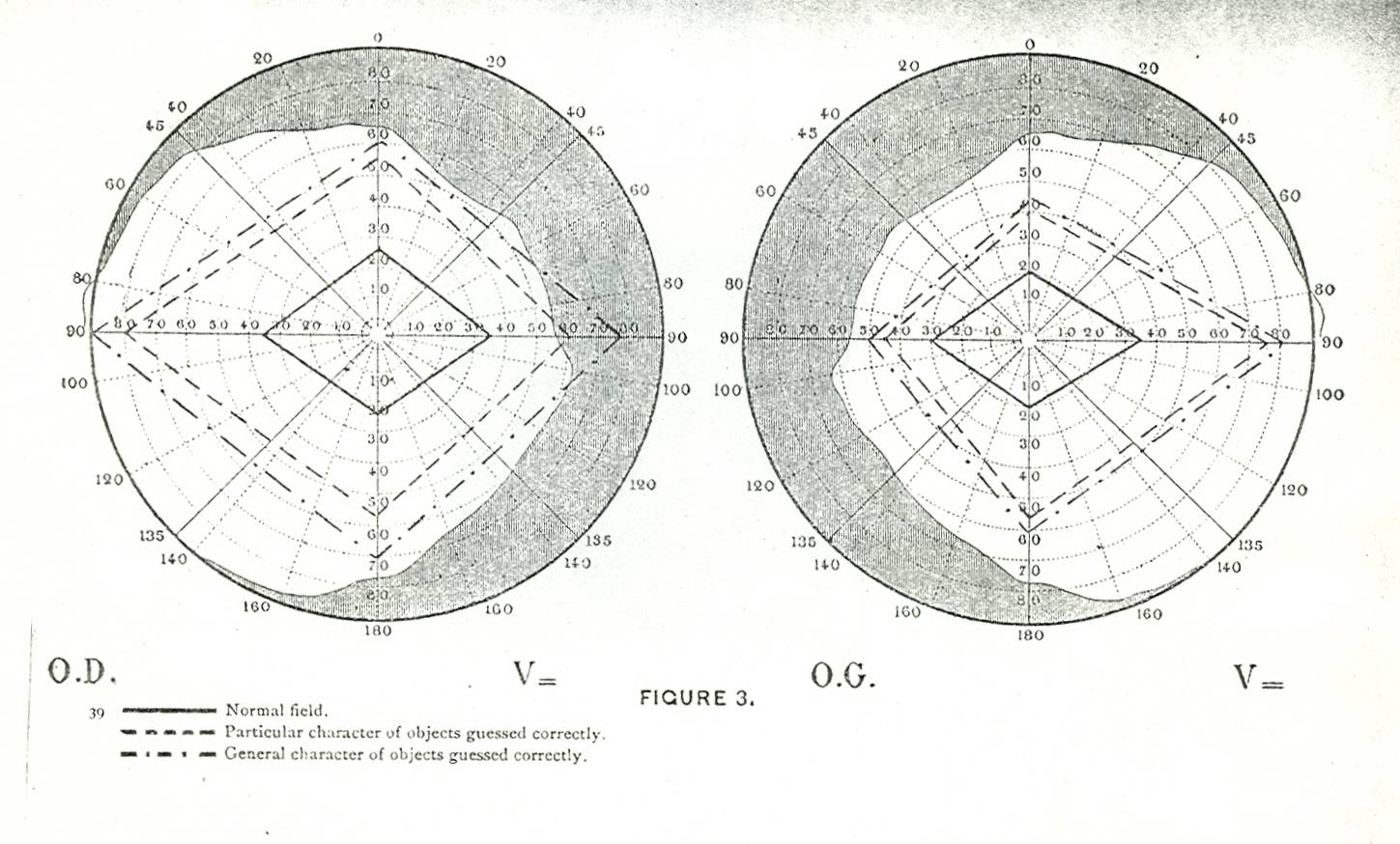 Eight numbers were given as memory test in the waking state. Patient repeated immediately two correctly. In the hypnotic state, out of eight numbers, five were correctly remembered.

Motor reactions were delayed, and tests by automatograph in the waking state clearly revealed the presence of subconscious motor reactions. (See Plates IX and X.)

On the whole, it may be said that with the abatement of the maniacal state the sense of sight and that of kinæsthesis alone showed disturbances; all the other senses were normal.

With the pneumograph, tracings were taken of the patient, first under normal conditions without any stimuli, and afterward under the influence of different stimuli. (See Plates I and II.)

1.  For a full discussion of the method of guessing in relation to the general and particular character of subconsciously perceived impressions, see Psychology of Suggestion, pp. 165-176.