EXPERIMENTS were then carried out in which the æsthesiometer was used. At first the sensibility of different parts of the body was determined in the normal state. Afterwards the same was tried under distraction, the patient writing down by means of automatic handwriting whether she felt one or two points. Now it is interesting to find that although the patient

under distraction did not seem to feel the touch stimuli, she still gave correct answers and her sensibility was much enhanced. (Figure 9.) Thus, for instance, on the back of the left hand in the normal state her sensibility was 30 mm., while under distraction the threshold of sensibility fell to 19 mm. With the general fatigue of the patient, the threshold became higher for both the normal state and the state of distraction. From our standpoint these experiments are interesting, because they show that the dissociated subconscious systems may prove more sensitive and have a lower threshold than the ones which constitute the patient's personal consciousness.

The same method was also employed with light stimuli. In this particular instance, the interest and value of the experiments are very great, because, as we have pointed out, the patient was suffering from a great contraction of the field of vision, a contraction so persistent that it did not yield to any hypnotic suggestion. The patient's field of vision was very narrow, as shown in cut on page 69. (Figure 10.) Minimum, 15°; maximum, 25°. 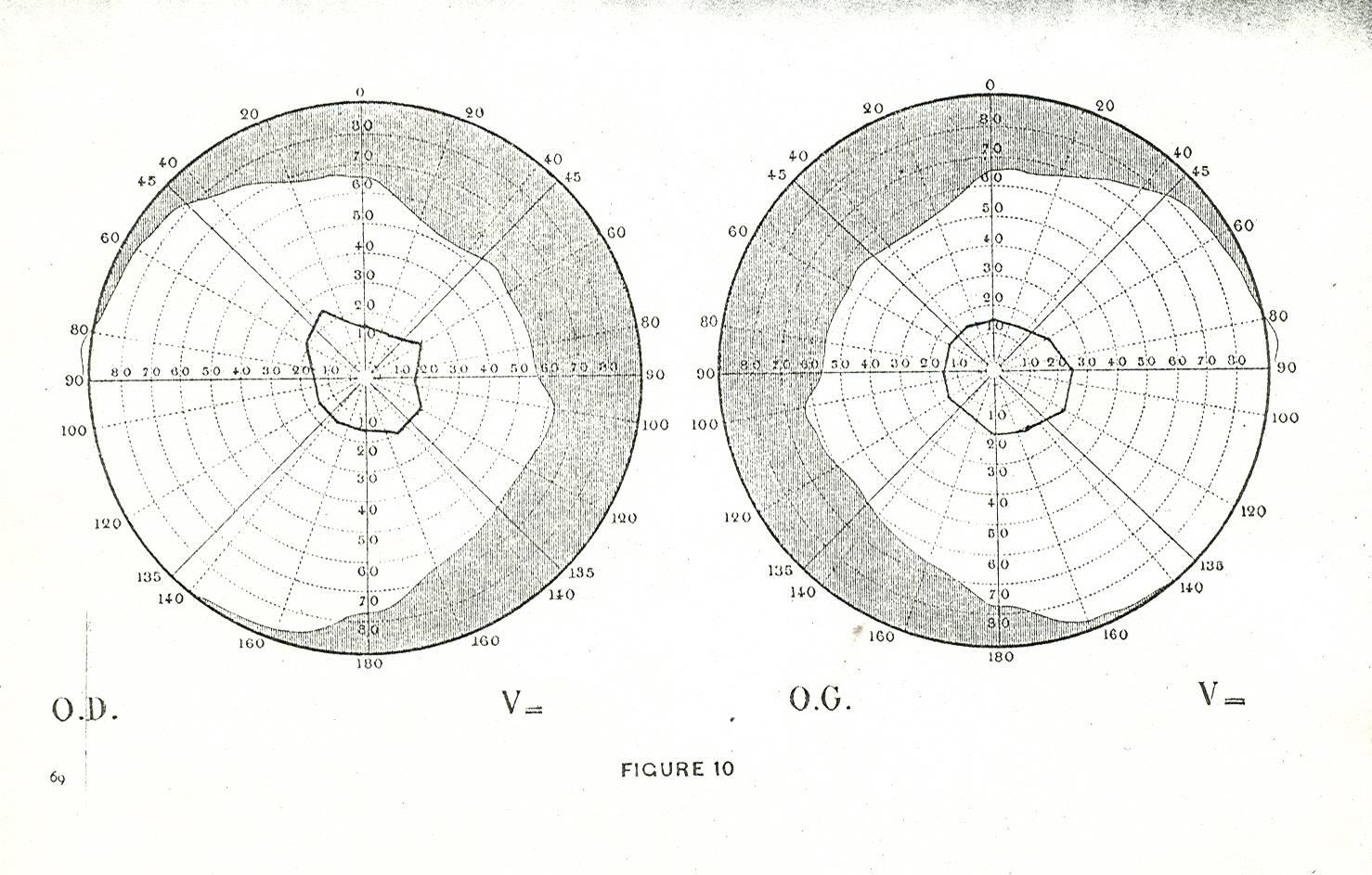 Patient was put in the hypnotic state and a post-hypnotic suggestion was given to her that when she saw a light she should fall asleep. A wakened by counting as before. Distraction by reading. Dr. S. places light at 90° from direction of vision and she goes to sleep. The patient evidently saw the light at 90°, although her field of vision was contracted to maximum 25°.

The same experiment under distraction was then tried with colored lights, and with the same results, clearly revealing the fact that the subconscious field of vision was more extensive than the one present to the patient's personal consciousness. The patient was put into the hypnotic state and a post-hypnotic suggestion was given to her that she should go to sleep when she saw a green light. Distracted by Dr. S. talking to her; a yellow light placed at her side―no result; a green globe was put over it, and when she turned her head so that it came into the average normal field of vision she went to sleep. During these experiments, pneumographic tracings were taken, and as soon as the light, colored or not, according to the suggestion, was thrown on the periphery of the retina, which was anæsthetic to light, she showed at once reaction in respiration as manifested in the pneumographic curve, tracings 4 and 5, Plate IV.

The interest here lies in the fact that the patient, in spite of the contraction of the field of vision, really manifested a very extensive field of vision present to the subconscious. Thus, while her retina was anæsthetic and the field of vision contracted for the patient's personal consciousness, there was really hyperæsthesia and great sensitiveness of the subconscious both for light and color. These experiments bring out clearly the nature of psychopathic anæsthesia, as expressed in the so-called "psychopathic paradox": Psychopathic anæsthesia is also hyperæsthesia.