Anamnesis:―J. A. C., female, æt. fourteen, nativity United States, was admitted to the Binghamton State Hospital at Binghamton, N. Y., March 9, 1901. The commitment was made by a judge on the facts contained in a certificate of lunacy made by two duly qualified examiners in lunacy who, after having examined the patient, gave it as their opinion that she was insane.

The petitioner gives as his reasons for desiring his niece committed as insane that she "does not recognize members of her own family, refuses to take medicine, has purchased poison, and attempts to commit suicide. Has to be watched constantly." The physicians who examined her made the following statements on which their diagnosis of insanity was based: "Said did not care where she was, that she would sometime kill herself and had things to do it with. Had something on her mind that worried her all the time. Found fault with family for keeping her locked up so she could not get out. Friends all against her, trying to get her away from her home. Crying, violent movements and acts; at times appearing quite rational, then suddenly becoming wild so that she has to be held. Refuses to take medicine; during attacks urinates in bed or upon floor; also bowels move in same manner. Tried to elude family in every way with suicidal intentions. Did succeed in taking something she supposed to be poison."

At the time of her admission to the hospital the physician who was in the office made the following note in her case: "Patient arrived at hospital accompanied by attendant and Mrs. W. Petition states that patient at times does not recognize members of her family, refuses to take medicine, has purchased poison, and has attempted to commit suicide. Medical certificate states that patient has been insane since February 12, 1901, that at times patient is uncleanly, that she has suicidal tendencies, and that this attack of mania seems to have been caused by la grippe, love affair, and hereditary tendency. Her mother died in an asylum. Patient said she did not care where she was, that she would at some time kill herself, that she had things to do it with, etc. In the medical office patient explained to the examining physician that at times she went into a condition where she would lose all control of herself and act and talk in a most irrational manner. During these periods she would both wet and soil her bed, and afterward would remember little or nothing of what had happened. She seemed pleased to think that she was about to receive medical treatment for her alienation and talked most intelligently about herself and her sickness."

The next morning I visited the patient and obtained from her the following history :

She says that for the past year and a half to two years her relatives have commented on the fact that she has not acted right, but no active symptoms appeared until from four to six weeks ago. Some months ago she spent some time with a relative at G. While there suffered from intense headaches and consulted a physician who told her, as near as she can recollect, that she had astigmatism, and inflammation of the eye muscles, but that back of it all there was some brain trouble. After this visit she spent some time with an aunt at N. This aunt told her, what she had never known before, viz., that her mother died in an insane asylum. After her father's death her mother worried a great deal, and finally became insane, dying only about two weeks after being taken to the asylum. While at N. she had alternate attacks of depression and exaltation. During the stage of depression, she was gloomy and refused to talk; during the stage of exaltation, she talked constantly to everyone's great annoyance. It was here, at N., that the first active symptoms developed. This first attack came on suddenly and she has no recollection of anything that occurred during it; the first thing she recalled was awakening at her home at R. and being surprised that she was there, not understanding how she had come from N. Since this attack she has had numerous others. The first was the longest, lasting about three days, the others were never over a few hours in duration. On one occasion during an attack she bought some things in a grocery, and came to only to wonder where they came from and what she had done with her money. She is acquainted with many of the details of these attacks from having been told them by her relatives. The most constant feature seems to be the mistaking of persons; especially is she prone to mistake those about her for her brother, even though they be women. During the attacks she often soils herself.

This constitutes the entire history of the case so far as I was able to obtain it from all sources at my command.

The cutaneous surface was anæsthetic in areas distributed over both sides of the body and involving the trunk and limbs. These areas were characterized by their greater size the farther they were located from the nerve centres (neuron energy),1 and by their rapid variation in size and outline. Their increase and decrease in area was so rapid that I have called them "pulsating areas of anæsthesia." Extensive changes would take place in a few moments, so that a particular spot that was anæsthetic at the time tested might not be so a few moments later, or vice versa. 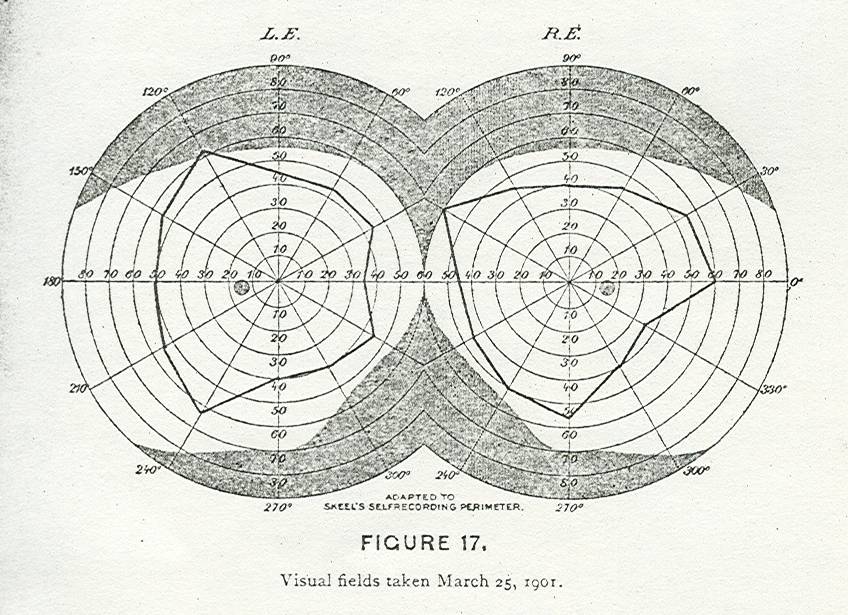 Visual fields were not taken before this date because of the high degree of asthenopia present.

In taking fields, it is my habit to make a pencil mark on each meridian as the limit of vision on that meridian is determined, and then outline the whole field when I have finished. In this instance I discovered, when I came to outline the fields, that at O. S. 90° I had two pencil marks―one at 45° and one at 55°. This field had evidently been taken twice in this direction and varied 10° between the first and second determination, illustrating well that the retinal anæsthesia closely resembled the cutaneous in its property of extreme and rapid variability and instability.

The skiometer showed an error of refraction for both eyes of ―.50 cyl. ax. 180° for which she was wearing

It was found possible to tap the subconscious through both the areas of retinal and of cutaneous anæsthesia. If, for example, I asked J. to think of a number and then pricked an anæsthetic spot a certain number of times the number thought of would correspond to the number of pricks. Similarly, if an object was so held that its image was cast upon the anæsthetic area of her retina, i. e., upon the area lying between the limits of her field of vision and the field which is normally visually active, and she was asked to name the first object that came to her mind, she would name the object held before her, although throughout the experiment she had been unable to see it.

During the first two days of J's residence in the hospital she had two attacks followed by complete amnesia. During the greater portion of the first of these attacks I was with her and so enabled to make a number of important and interesting observations.

In both her normal condition and during her attacks she suffered from a well-developed suicidal obsession, and from erythrophobia (ερνθρός, red, φόβος, fear). Her attacks are ushered in by a distinct sensory aura: pain in the occiput. During the attack in which I saw her she did not recognize those about her but mistook them for friends and relatives and did not realize where she was, evidently thinking she was home. She also said and did things for which there was no apparent reason.

J. is hypnotizable, sinking readily into deep somnambulism, during which state she accepts suggested hallucinations both positive and negative. She also accepts post-hypnotic suggestions.

She is very bright and was a good student at school, and is very much alive to all that is going on about her. She is, however, self-centred, given to morbid introspection, and not interested in things which ordinarily interest girls of her age.

Emotionally she is very mercurial, easily pleased and as easily hurt. She has a tendency to alternate between conditions of comparative exaltation and of comparative depression. During the former she is happy, smiling, and very active, and apt to overdo and become greatly fatigued. This fatigue assists in producing the depressed state, during which she is overwhelmed by depressing thoughts, quiet and inactive, her mind constantly occupied by the idea of self-destruction.